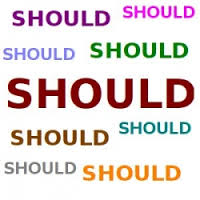 Society will always try to change you by telling you what you ‘should’ do. The media does it and people don’t get it. There once was a time when the purpose of the media was to report the news; those days are gone. Now the media just makes the news instead because people are proving incapable of making decisions for themselves.

Yep. I heard it all. I heard all the shoulds known to man. I dated the man who actually told me, ‘You should dress like her, talk like her, and wear your hair like her. Then you would be beautiful.’ You should have seen his face when I walked out and never looked back. And don’t tell me I should have; unless it was just to see the look on his face. But I already knew.

So it begs the question: are you living the life you should be living? Or are you living the life others think you should be living? It’s a tough question I know. I once was there. I had the Bible teacher tell me that at age 37 I should have a teeanager because that is where I ‘should’ have been. There is a systematic order to how life goes you see. Yeah sure. I see the misery on the faces of all the people who followed what others said they should do.  It goes the way it is supposed to go for each of us and it’s only until we stop the shoulds that we can be free.

If you are trapped into living what others think stop. Forgive yourself and do it quick. You don’t want to live for others who aren’t even doing it for themselves. That doesn’t even make sense. You are where you are and while it may not be where you  want to be; you are the one to change that. No one else. Forgive yourself for falling into the trap that thinking the boring house in the suburbs will answer all your questions when in actuality you are miserable but just biting your  tongue waiting to escape. Forgive yourself for not being true to who you were created to be. Life is short so don’t let another day go by where you think about what you should do instead of just doing it.

We all are where we are and the best part is that no one else can get you where you should be except for you. So today; where do you want to go? Where do you want to go that you know you should have gone back then? There is nothing stopping you; no more coulds or shoulds. Just you. Get out of your way, forgive, and get to where you are going! You can do it. How do I know? Because I did.